Hue used to be the capital of Vietnam during the Nguyen Dynasty, from 1802 to 1945. The vestiges of the past still remains today. Coming to the city alongside the Perfume River, visitors will be amazed by the spectacular beauty and high cultural value of the monuments, tombs, and pagodas.

Thanks to the significant value, the complex monuments of the Imperial Citadel of Hue and the Imperial Court Music have been designated as UNESCO World Cultural Heritage. The city then gains its reputation as a cultural and religious center of Vietnam in particular and Southeast Asian in general.

The Imperial Citadel of Hue

It is a complex monument which was built during the 19th century. The Citadel of Hue is actually a walled fortress and palace with impressive architecture. The construction of that massive monument involved in more than a thousand of workers and huge volume of burden workload. With the well-preserved architecture, that site was made a UNESCO World Cultural Heritage in 2003 and have attracted a large amount of tourists since then.

Another worth-visiting place is the complex of Emperor Tombs, including Gia Long Tomb, Minh Mang Tomb, Khai Dinh Tomb, and Tu Duc Tomb. Each tomb represents different viewpoints of the Nguyen Emperors. Visiting the tombs, history lovers will have a chance to explore the life and viewpoints of the Emperors. These relics are also parts of the Citadel – a World Cultural Heritage.

As a religious center of Central Vietnam, Hue has a lot of temples and pagodas. The most famous among them is Thien Mu Pagoda on the Northern bank of Perfume River. Its alluring beauty is a huge attraction to visitors.

Located in the foot of Ha Khe Hill, Thien Mu Pagoda (Linh Mu Pagoda) is just about 5km from the city center of Hue. Built in the 17th century, it is considered the oldest pagoda in Thua Thien Hue province. Though having been restored many times, the pagoda still remains its ancient look. There are some notable architectural works such as Phuoc Duyen Tower, Dai Hung Shrine and Dia Tang Shrine. Visiting Thien Mu Pagoda, tourists will immerse their souls in pagoda sightseeing and go into the pure and majestic space, which cannot be seen in bustling cities.

On the way to Thien Mu pagoda, Tha Om Garden House is a worth-visiting destination where visitors can not only hear the stories about the history of Vietnam but also try the finest Hue dishes. It is a sophisticated garden with lotus ponds and pavilions, creating an unforgettable memory for travelers of the traditional Hue residence harmonizing with an extraordinarily delicious Vietnamese dinner.

Located in Thuy Thanh Commune, Thanh Toan Village is among the most beautiful villages in Hue. Visitors love to ride bicycle around the village to watch the tranquil scenery of a Vietnamese village as well as visit some interesting destinations. Thanh Toan tile-roofed bridge, the communal houses, and clan worshipping houses are great to pay a visit. Also, traditional festivals are perfect to join in.

After discovering the history and culture of Hue, here comes the time for relaxing. Lang Co Beach is regarded one of the most beautiful beaches in the world. With more than 10 kilometers of coastline, Lang Co has soft white sand-bank and turquoise sea water, which is a huge appeal to travelers. It is wonderful to dive into the cool water there.

The beach is even more attractive when it is located closely to some sightseeing spots and cultural sites, namely Bach Ma National Park, Hue Citadel and Da Nang City. It is a perfect stop during your travel. 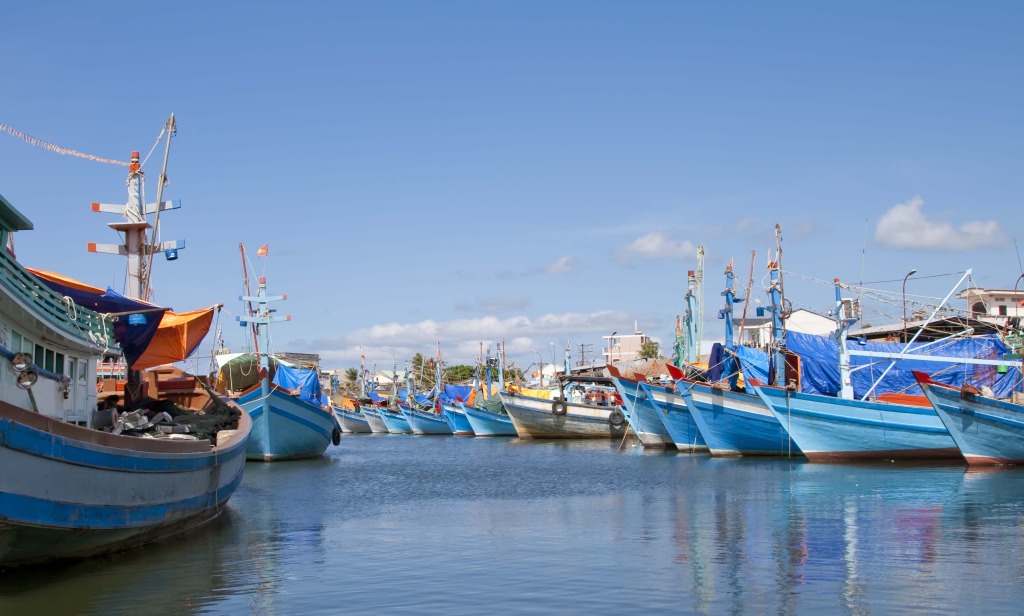 How to go to Phu Quoc

There are two ways to get to Phu Quoc: by sea and by air. Domestically, flights to Phu Quoc are available from many cities in Vietnam including Ho Chi Minh City (45-minute flight), Hanoi, Rach Gia and Can Tho via Vietnam Airlines (the national carrier) and several budget airlines: Jetstar Pacific, Vietjet air and Vasco (a subsidiary of Vietnam Airlines). In peak season, there can be as many as 15-20 daily domestic flights to Phu Quoc, but it is advisable to book early to avoid disappointment as flights to Phu Quoc can sell out during the high season of December to April. From Phu Quoc International Airport, visitors can travel the 9 km to the main town of Duong Dong by taxi, motorbike or hotel transfer. Internationally, there are direct flights to and from Phu Quoc from Siem Reap, Cambodia and Singapore via Vietnam Airlines with more routes being added all the time. Best of all, because Phu Quoc is classified as a Special Economic Zone, visitors of all nationalities flying in / out of Phu Quoc only (and not visiting the Vietnamese mainland) are granted a visa exemption to stay up to 30 days. Please check with the Vietnamese embassy or consulate in your country for additional requirements including having a passport valid for at least 6 months beyond your stay and a round-trip ticket to / from Phu Quoc. Alternately, getting to Phu Quoc by ferry is cheap and easy. Ferries leave from the coastal towns of Rach Gia or Ha Tien on the Vietnamese mainland. If traveling from Cambodia, Ha Tien is easily accessible from the seaside resort towns of Kep (25 km) and Kampot (66 km). There are a few ferry companies including Superdong, Duong Dong Express and Ngoc Thanh, with Superdong offering the most reliable service, providing  one morning and one afternoon departure from Rach Gia for the 2.5 hour journey and four daily departures from Ha Tien for the 1.5 hour trip. There is also a slow ferry from Ha Tien to Phu Quoc operated by Thanh Thoi for those traveling with cars. Ferry tickets can be easily bought through your hotel, at travel agencies or at the ferry dock. The best time to travel by ferry is from late October to May when the weather in Phu Quoc is dry and the seas are calmer. During the wet / monsoon season (June to September), ferries are still scheduled to run daily but inclement weather may make for rough seas or cancellations. Most fast and slow ferries will take you to Bai Vong Port on Phu Quoc, close to Long Beach. From there to the main town of Duong Dong, there are multiple transportation options, including motorcycle taxis (each able to carry one passenger with minimal luggage), taxis and shared mini-buses.
Read more There are two basic ways to get to the island from Saigon: by sea and by air. By sea Tourists can choose either the route Sai Gon – Rach Gia – Phu Quoc or the route Sai Gon – Ha Tien – Phu Quoc. Please note that this way may not suitable for the elderly and children due to long hours on bus and on the boat. Route 1: Sai Gon – Ha Tien – Phu Quoc Via the route of Sai Gon – Ha Tien – Phu Quoc, there are two stops that tourists can catch a bus to Rach Gia: Le Hong Phong Street, District 10 and Mien Tay station. At the first stop, Phuong Trang is a reliable bus that serves tourists 31 rides every 30 minutes every day. Tourists should book their seats via calling on 08 3833 3468 at least 24 hours in advance to guarantee their seats, especially in peak season. Another way to book a seat is go to their website at https://futabus.vn/en-US , fill in information, choose your favorite spot, and pay. Both the hotline and the website are supported with English language so that booking process can be easily done by foreigners. From Mien Tay station, there are several buses such as Kumho Samco, Mai Linh, Ba Dung, Tuyet Hon, Chau Ha that go to Rach Gia (Kien Giang). As the bus takes 6-7 hours, it’s recommended to pick up one that departs at night, in order to reach Kien Giang in the morning. Price for each bus ticket ranges from 120,000 to 150,000 VND (5.3 – 6.6 USD). On special occasions, the price can go up to 210,000VND (9.2 USD). When reaching the bus station in Rach Gia, tourists can choose to walk or to get on a motorbike taxi for half a dollar to get to Rach Gia boat station which is only 1km away. There are several hydrofoils between Phu Quoc and Rach Gia with Superdong offering the most reliable service, providing one morning and one afternoon departure from Rach Gia for the 2.5-hour journey and with prices ranging from 240,000 – 330,000 VND depending on age. For more information on the prices, tourist can find out at http://superdong.com.vn/dich-vu/gia-ve-tau/. Route 2: Sai Gon – Ha Tien – Phu Quoc Via the route Sai Gon – Ha Tien – Phu Quoc, tourists also catch a bus then a hydrofoil or a ferry to get to the island. Phuong Trang Bus, also known as FUTA Bus Lines offers 6 departures every day from Mien Tay Bus Station with the price of 170,000 VND/seat. Again, tourists should book their seat beforehand via calling on 0838.309.309 or the website of the bus lines at https://futabus.vn/en-US. From Ha Tien, Superdong departures three times per day at 7:30 am, 8:00 am and 1:15pm with the price of 230,000VND/adult. Ferry is an alternative choice yet it takes longer time and the destination is far from Phu Quoc’s center. Ferries leave Thanh Thoi (Ha Tien) and reach Da Chong Port (Phu Quoc) after a two-hour journey. From Da Chong, travelers can take a motorbike taxi, which is called “xe om” in Vietnamese, to get to Duong Dong town. Transfering by ferry is also suitable for motorbike travelers as the ferry can carry common vehicles. However, it’s not recommended for a group of girls/families with kids to take this route as taxis are not always available around the port. By air This is the fastest and the safest way to get to the island. Domestically, flights to Phu Quoc are available from many cities in Vietnam including Ho Chi Minh City (45-minute flight), Hanoi, Rach Gia and Can Tho via Vietnam Airlines (the national carrier) and several budget airlines: Jetstar Pacific, Vietjet air and Vasco (a subsidiary of Vietnam Airlines). In peak season, there can be as many as 15-20 daily domestic flights to Phu Quoc, but it is advisable to book early to avoid disappointment as flights to Phu Quoc can sell out during the high season of December to April. From Phu Quoc International Airport, visitors can travel 9 km to the main town of Duong Dong by taxi, motorbike or hotel transfer. The fare for taxi should be 10,000VND/km, and around 6,000VND/km for motorbike taxi.
Read more