Other than spending gloriously long days on some of Vietnam’s best beaches, Phu Quoc’s interior also has much to be discovered…

A Walk in the Park

Established in 2001, Phu Quoc’s National Park was declared a UNESCO Biosphere Reserve in 2006 for its diverse collection of flora and fauna, including 208 animal species ranging from mammals (lorises, macaques and langurs) and birds (including hornbills) to reptiles and amphibians. To explore the park located mainly in the northern half of the island, it’s best to have some experience on a motorbike, as paths are often just loose soil and sand. Nature lovers will enjoy taking walks available along marked park trails for a more up-close view of the forest and occasional glimpses of wildlife, especially towards the village of Ganh Dau. Bring water and a hat and expect little signage and sparsely maintained trails along the way.

As the Champagne region is to France, Phu Quoc produces some of Vietnam’s finest fish sauce, a pungent liquid extracted from fermented, salted fish and the must-have ingredient that finds its way into almost every Vietnamese dish. Phu Quoc fish sauce is world-renowned for its premium quality, thanks to the abundant seaweed and plankton around the island that feeds the anchovies needed for the dark golden colored sauce. In fact, fish sauce made elsewhere often falsely uses the Phu Quoc brand! Phu Quoc attractions include visiting a fish sauce factory where you’ll find larger-than-life wooden vats up to 4 meters high containing up to 13 tons of deliciously pungent fish sauce. You may want to buy a genuine bottle as a souvenir, but keep it wrapped well as the very smelly sauce is literally the last thing you want to break in your suitcase.

Phu Quoc is equally well-known for its premium peppercorns, producing more than 1,000 tons per year. Especially towards the center and north of the island, visitors are likely to come across large swaths of land covering a total of 400 ha dedicated to this crop, known for its heat, pungency and strong aroma which comes from using only organic fertilizers and drying the peppercorns individually in the sun, thereby retaining their essential oils and natural flavors. It’s so delicious, you’ll often find Phu Quoc pepper fresh, still on the stalk, in stir-fries and other Viet dishes. If you’re careful, farmers will usually not mind visitors taking a look at the plants which are harvested by hand between February and July. In other months of the year, you can still tour the plantations to see the leafy green plants. 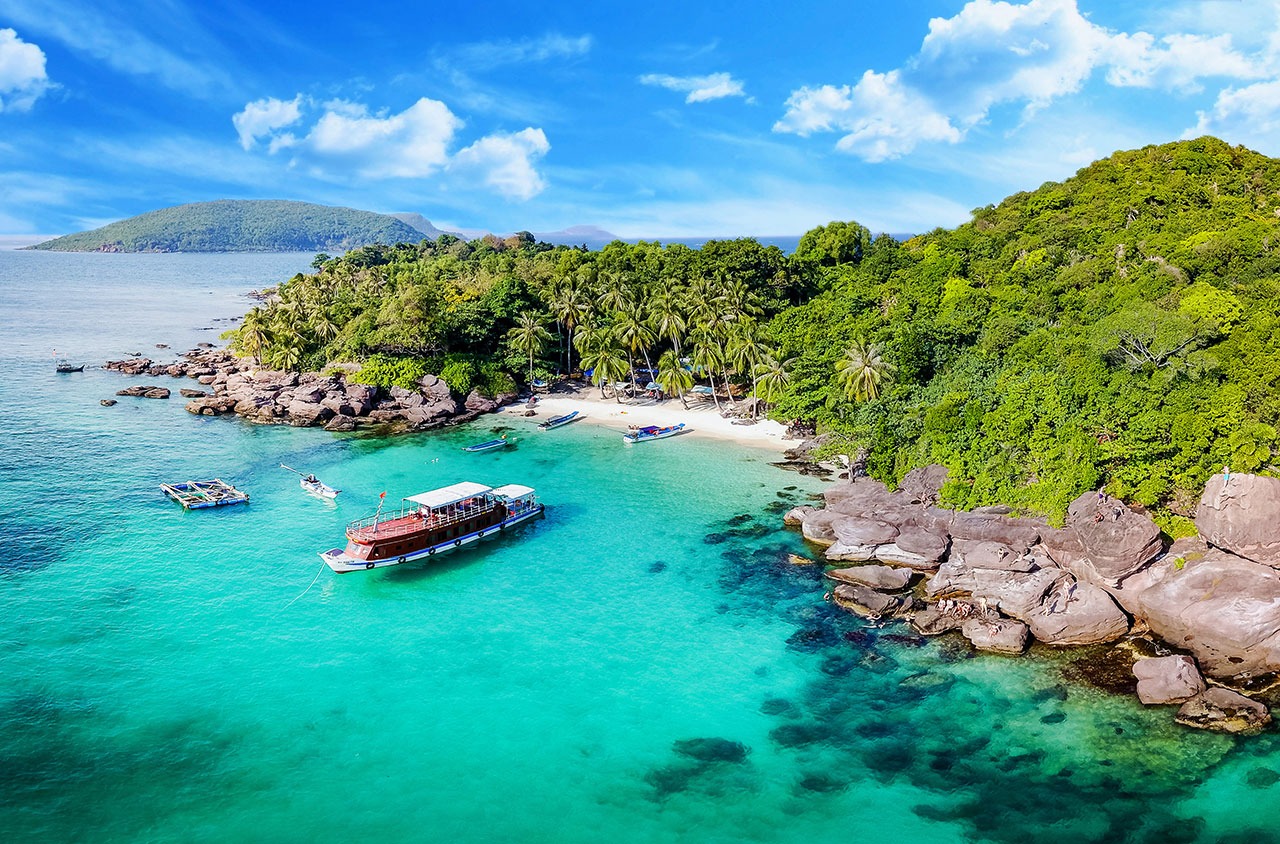 Located on the eastern coast of mainland Southeast Asia, the Socialist Republic of Vietnam is bordered by China to the north and Cambodia and Laos to the west. The country is long and narrow, shaped like the letter S, with Hanoi (the capital) and the Red River Delta to the north and Ho Chi Minh City (Vietnam’s largest city, also known as “Saigon”) and the Mekong Delta to the south. Vietnam has a coastline of 3,444 km (2,140 mi) with the East Sea (also called the South China Sea) to the east. Vietnam’s climate is tropical in the south and monsoonal in the north. While there are slight variations in temperature, Vietnam’s climate can generally be divided into the rainy season (May to September) and the dry season (October to March). With an estimated 95 million people, Vietnam ranks 14th in the world in population. About 85-90% of its population is ethnic Vietnamese (also known as “Kinh”), with 53 other ethnic groups recognized by the government. Vietnamese is the official language, and has some similarities to Khmer, Thai and Chinese. Under Chinese rule for a thousand years, an estimated 30% of Vietnamese vocabulary is derived from Chinese. Thanks to French colonial rule, Vietnamese uses a Romanized alphabet, unlike most of its Asian neighbors. While Vietnam has no official religion, the majority subscribe to what’s known as the “Three Teachings” of Confucianism, Taoism, and Buddhism. Ancestor worship is common. It’s estimated that up to 10% of the population are Roman Catholics, followed by smaller numbers of Protestants, Muslims and Hindu. In the Mekong Delta, the Cao Dai and Hoa Hao sects are popular, in part based on Buddhism. Vietnam’s main exports include seafood, rice, crude oil, clothing and coffee. The monetary unit is the Dong (VND) where VND 22,700 is equal to USD 1.
Read more 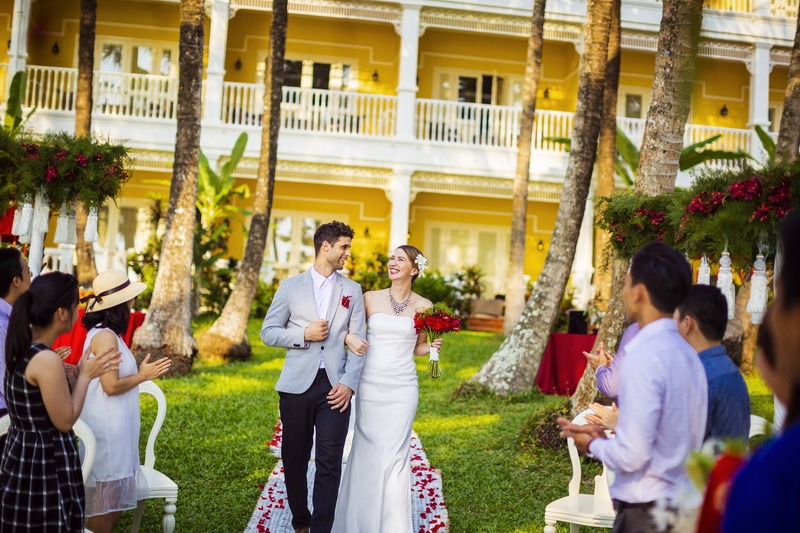 With miles and miles of pristine beach, a laid-back fishing village vibe and easy accessibility to the mainland via ferry or a short one-hour flight from Ho Chi Minh City, Phu Quoc makes for the ideal destination wedding. For the boutique wedding of your dreams, look no further than the intimate La Veranda Resort Phu Quoc. Named ‘Asia’s Best’ Luxury Romantic Beach Resort by The World Luxury Hotel Awards, La Veranda’s perfect mix of warm Asian hospitality, international-standard 5-star service and spectacular backdrops makes it the ultimate destination wedding venue. From barefoot beach ceremonies to classic cocktail receptions to inspired theme weddings, romance rules at La Veranda. Our crack staff of wedding planners, designers, chefs and servers are ready to turn your special day into a truly unforgettable one, hosting up to 60 of your closest friends and family. Barefoot Chic The resort’s private stretch of wide, sandy beach can be transformed into the perfect backdrop for a barefoot ceremony. Imagine reciting your vows under a gorgeous canopy with the sun, sand and sea as witnesses to your most special of days. Classic Cocktails Our Indochine-chic lounge with its vintage-inspired tiles and plantation-style doors opens out onto the beautifully manicured lawn to create an intimate indoor / outdoor space for your guests to mingle before and after the ceremony. Whether it’s cocktails under the star accompanied by soft ocean breezes rustling through the palm trees, or a full sit-down meal served on the beach, the lawn, or at The Peppertree, La Veranda’s own fine dining restaurant, your reception will be as memorable to your guests as it is to you. Sumptuous Theme Weddings Choose from an Exotic Vietnamese Wedding, complete with dancing dragons, blessings by a monk, and flowing silk tunics or a Tropical White Wedding theme where our gardens burst with sprays of all-white blooms, soft lanterns sway overhead and two become one under a bamboo arch draped in dreamy white linen. Imagine your wedding ceremony in a romantic paradise of Phu Quoc with a stunning sunset as the backdrop and gorgeous land-and-sea natural settings. All can be realized in La Veranda Resort Phu Quoc. There are two common themes on offer for boutique weddings: Chinese theme and beach theme. Chinese theme With splendid, boasting, delicious food and vibrant colors, Chinese weddings hold a special cultural status. Originated from millennial traditions, Chinese weddings carry a strong emotional connection to a myriad of brides and grooms who have come before, which is the reason why a Chinese traditionally-styled wedding is so special. In true Asian fashion, Chinese weddings feature meticulous customs and involve an array of deeply meaningful wedding rituals including the traditional Tea Ceremony, in which newlyweds serve tea to the groom’s family before receiving wedding presents. The centerpiece has an important meaning in any Chinese weddings as it signifies happiness and fertility. Traditionally, Chinese wedding receptions are splendid and vibrant events owing much to their most fundamental feature: the red color, a symbol of luck, happiness and prosperity. This is also the reason why the Chinese wedding dress is particularly styled in this color. Likewise, common Chinese decorative items namely lanterns, fans, or umbrellas often combine red with shades of gold as a wish for wealth and prosperity. These typical design elements can easily be incorporated into the decor, along with happily meaningful flowers such as red roses, orchids, peonies, narcissus, daffodils or other kinds of flowers that match your preferences. Another essential aspect of Chinese-themed weddings is authentic local cuisine, meticulously prepared for this special occasion, featuring a selection of delicious specialties, sizzling with flavor and style. To make your big day unique and unforgettable, La Veranda’s meticulous wedding planners will plan and tailor the marriage festivities according to your specific requests, making sure the design proposals meet your requirements. Beach theme Beach weddings always epitomize blissful romance. They are the sort of once-in-a-lifetime event that any women would dream of. This kind of weddings usually brings together small groups of about 50 people for an intimate affair with kins and friends. The idea of a beach wedding is appealing to many soon-to-be-wed couples, especially to those who are ocean lovers. It is the sea’s vibrant hues, from turquoise to brilliant deep blue pigment, blended with white fine sand that create a breath-taking wedding backdrop. La Veranda oceanfront destinations offer ideal venues for couples choosing to exchange their vows with the witness of everyone. Meticulous wedding planners at La Veranda will propose you many creative ideas, for instance by creating a fresh seafood-inspired menu, or simply by matching the color theme of your centerpieces with the surrounding coastal palette. Beach wedding packages are also designed to help you realize your dream of a beachfront wedding in style, associating the timeless elegance of chic contemporary accommodation and the naturally beautiful surroundings of the luxurious seaside locations across the globe. Documentation for a marriage has to be consulted with your national embassy and cannot be done in Phu Quoc but a nice and romantic ceremony can be arranged to make the dream come true.
Read more